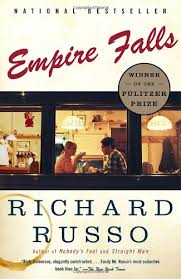 Empire Falls is a great novel with many layers and characters and that’s just the kind of story I like to read. It won the Pulitzer Prize for Fiction in 2002 and HBO made it into a miniseries in 2005 (check it out here). I read it much later than most people, but I think the story and characters survive the time.

Its first layer is about Empire Falls, Maine, a town that is struggling to survive and is controlled by Francine Whiting, of the once-strong Whiting Industries. This backdrop introduces you to those who have chosen to stay and they make up many of Russo’s subsequent interconnecting layers. We learn about Miles Roby, his failed marriage to Janine and his own parents’ unhappy marriage. We meet Janine’s fiancé, Walt Comeau, and try to understand the new life she is about to begin. And later on we see how Miles struggles to understand his mother Grace and the choices she made as a young woman.

But this story is also about Miles and Janine’s high school daughter Tick, her friends Zack Minty, Candace and especially John Voss and these intense teenage relationships and conflicts. Russo has skillfully introduced this sleeper plot and we see how it slowly moves the story to its climax. I also like how Russo includes many other side characters, such as Jimmy Minty, Otto Meyer, Miles’ brother David, Charlene and Father Mark and develops them so we know that their lives are just as complicated, and are key parts of the story.

In addition to an excellent plot that is carefully constructed and both serious and humorous, this story is about the control of money and people, survival and the search for happiness. And on top of that, many of Russo’s characters struggle to understand the meaning of life and religion as they face both painful memories and discoveries.

There are many seemingly small pieces of conversations that, upon a second look, show how much thought went into writing Empire Falls. For example, Russo shows just how complicated father-son relationships are as he parallels Miles and Max with Jimmy Minty and his father. Both Miles and Jimmy hang onto their fathers, despite their flaws. Jimmy says, “He did slap my mom around a little…But I miss him anyway. You only get one father, is the way I look at it.” Later Miles tries to explain to David why he keeps giving their own father a second chance: “He’s pretty good at getting to me. I guess I don’t want to be sold short when I’m old.”

I think my favorite scene is when Jimmy Minty and Miles argue at the football game. Russo shows so well just how someone who is as unsophisticated as Jimmy still has excellent insight into people. Jimmy says, “You’re not the only one people like, okay? And I’ll tell you something else. What people around here like best about me? They like it that they’re more like me than they are like you. They look at me and they see the town they grew up in…You know what they see when they look at you? That they ain’t good enough. They look at you and see everything they ever done wrong in their lives.”

I also think Miles’ relationship with Cindy Whiting is very interesting and was glad to see how Cindy’s character developed from someone pathetic and needy into someone strong and independent. She’s also an example of a character we think is less significant, but who comes up with something important to say. She tells Miles, “It’s like you decided a long time ago that someone like me is incapable of joy…It doesn’t occur to you that I might be happy.”

The Whiting family dynamics and history are also very interesting and amusing and Russo has a different style of describing these people, using irony and a cold kind of humor. I liked this part just as much, particularly the story of Francine’s gazebo.

Empire Falls has a tidy and satisfying ending, with just enough open story lines to make me hopeful about the characters and their futures.

What you do with the weather #amreading #readingcommunity
Hey readers and bloggers! If you’ve read something good and want to talk about it, consider being a guest reviewer on Book Club Mom. Email bvitelli2009@gmail.com for details. #books #readingcommunity
⭐️Be a star on Who’s That Indie Author! Email Book Club Mom at bvitelli2009@gmail.com for details.
Still snowing! #snowday
#amreading #mystery #bookclub
Love my new reading socks! #reading #books 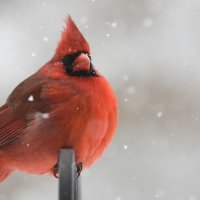 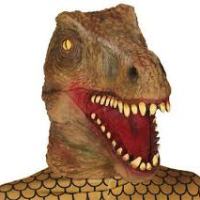 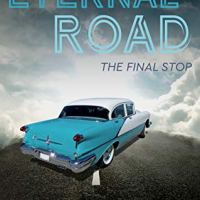 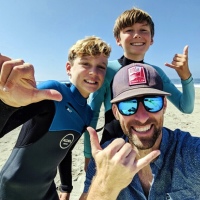