Sid Elliott is a Viet Nam War vet, back home with a humiliating shrapnel injury and additional damage much deeper than his wound. Now he’s a hospital orderly, recently transferred from the Emergency Room to the morgue, a lateral transfer, he’s told, but he knows it’s because he jumped in to help an ER patient, to prevent her from banging her head on the wall. Sid had overstepped.

Newly sober, Sid meets Roxanne, a sickly-thin, scarred and aimless alcoholic and drug addict. His large size is in direct contrast to Roxanne, yet he feels lost in her smallness. This story is about Sid trying to cope with all things. His father is dead. He visits his mother, but their relationship is flat. What he has with Roxanne is more of a desperate grasping, often ugly, sometimes tender.

Sid thinks about the doctors in the ER, how they treat the bodies, but not the souls. And if they can’t save the bodies, they harvest what they can. The doctors discuss this, laughing, removed from their patients and, Sid thinks, they don’t allow these people their dignity.

When Sid is told to transfer Gloria Luby, a grossly immense dead woman, to the examining table, he thinks this is his chance to show respect, to treat her as the person she was only hours earlier. The doctor is grimly flippant with his orders: “Shove her up there on the slab any way you can.” He adds, “You’ll have to roll this one. She won’t mind.”

The transfer results in disaster and a physical and personal crisis for Sid. His foolish attempt leaves him both hurt and haunted by ugliness of the war and his personal relationships at home.

I tend to prefer more upbeat stories, but this one got to me. It’s not a pretty story, but Sid’s character is so well-defined, that I still view him as a hero, despite his failure. And I’m left with the feeling of wanting to help him.

Biography: Melanie Rae Thon’s most recent books are the novel  The Voice of the River  and  In This Light: New and Selected Stories.  She is also the author of the novels  Sweet Hearts,  Meteors in August,  and  Iona Moon,  and the story collections  First, Body  and  Girls in the Grass.  Thon’s work has been included in  Best American Short Stories  (1995, 1996),  three  Pushcart Prize Anthologies  (2003, 2006, 2008),  and  O. Henry Prize Stories  (2006).  She is a recipient of a Whiting Writer’s Award (1997),  two fellowships from the National Endowment for the Arts  (1992 and 2008),  a Writer’s Residency from the Lannan Foundation  (2005),  and a fellowship from the Tanner Humanities Center  (2009).  Thon’s fiction has been translated into French, Italian, German, Spanish, Croatian, Finnish, Japanese, Arabic, and Farsi.  Originally from Montana, Thon now lives in Salt Lake City, where she teaches in the Creative Writing and Environmental Humanities programs at the University of Utah.

You can find more information about Thon here and here.

Welcome to an occasional feature on Book Club Mom. Short reviews of short fiction. This selection comes from The American Tradition in Literature, Fourth Edition.

“Where Are You Going, Where Have You Been?”
by
Joyce Carol Oates

This short story, written in 1970, is a creepy story of suspense, fear and risk that begins with Connie, a fifteen-year-old girl who is full of the adolescent excitement of being young. That summer, Connie and her best girl friend find new boys every night when they are dropped off at the shopping plaza, to shop or see a movie, so they’ve told their parents.

One night, after meeting a boy named Eddie, Connie catches the eye of a different, mysterious figure in a car, who grins at her and wags his finger, “Gonna get you, baby,” he says.

First Oates sets an easy mood of kids being kids. Then Arnold Friend pulls up to Connie’s house, with Ellie Oscar along for the ride. She’s alone. Her family is gone for the day and somehow Arnold knows all about this. “You wanta come for a ride?” he asks. Connie talks through the screen door. Something isn’t right about Arnold Friend. He looks older than she thought. But he has a smooth way of talking and Connie can’t decide. The reader can see just how dangerous he is, but Connie doesn’t see the risk. She’s pulled by the danger, despite her fear.

Oates does a great job showing Connie’s flawed reasoning. When Connie is tempted by the thrill of a break from her otherwise boring teenage life, she has only herself to rely upon. The abrupt ending leaves the reader afraid.

This is a dark story, with a great insight into the uglier side of human interaction. It’s a raw and unsettling read with lingering effects. The story was adapted into the 1985 movie Smooth Talk. I also found a modern YouTube adaptation by Ana Proulx, which captures the scary mood of the story. Check it out here.

Oates dedicated this story to Bob Dylan. She said she was inspired to write “Where Are You Going, Where Have You Been?” after listening to his song, “It’s All Over Now, Baby Blue.”

Joyce Carol Oates is the author of more than 70 books, including novels, short story collections, poetry volumes, plays, essays, and criticism, including the national bestsellers We Were the Mulvaneys and Blonde. Among her many honors are the PEN/Malamud Award for Excellence in Short Fiction and the National Book Award. Oates is the Roger S. Berlind Distinguished Professor of the Humanities at Princeton University, and has been a member of the American Academy of Arts and Letters since 1978. (From Amazon.

For more information about Joyce Carol Oates, including a full list of her writing, visit the following links: The Academy of Achievement and Wikipedia. 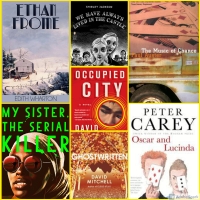